Beware of Vultures: The Observations of a Montana State Senator

"[I]t seems odd that the top lobby spender in Montana this year was Compassion and Choices, a 'nonprofit' group that spent $160,356 advocating for legalization of assisted suicide."

As we wrangled through the budget this spring, the beautiful state capitol began to feel like a big, ripe carcass with a dark cloud of vultures circling about.

The magnitude of money in government attracts far more folks who want to be on the receiving end than it does those who just want fair and functional government. Until that ratio improves, it may be impossible to rein in unnecessary regulation and spending.

Special interest groups spent over $6 million dollars on lobbyists to pressure Montana legislators during the 2013 session. Seems like a lot of money, until you compare it to the billions of taxpayer dollars at stake. Does the average taxpayer stand a chance against organized forces like that?

As your Senator one of my main duties is to sort out who wants your money, or a change in a law, and why. Getting to the bottom of it takes work. It would certainly help if well-intentioned citizens would do a little more research before clamoring onto any particular bandwagons as well.

We have to be careful not to be fooled by catchy slogans, shallow campaign propaganda, biased media reports, or plays on our emotions which, too often, conceal a multitude of hidden agendas.

For example, it seems odd that the top lobby spender in Montana this year was Compassion and Choices, a “nonprofit” group that spent $160,356 advocating for legalization of assisted suicide. The second biggest spender was MEA-MFT, the teachers and public employees union who spent $120,319 pushing for state budget increases.

I earned a reputation for asking a lot of questions. I certainly didn’t take this job to rubber stamp anything. It's my duty to determine whether a proposal relates to an essential, necessary service of fair and functional government, or if it is motivated by piles of money to be gained from ill-advised government decisions.

You see, there is so much money in government that almost everything in government is about the money. The usual tactic is to disguise a ploy as “the humane thing to do”. . . .

Some groups work very hard to provide factual information about their issue. Others stoop to the lowest of lows to invoke heart wrenching emotions, twisted half-truths, or outright lies. You really have to look carefully for all the angles.

Assisted suicide is another issue that can be highly emotional. There are deep and valid concerns on both sides of this life and death debate. But I found myself wondering, “Where does all the lobby money come from?” If it really is about a few terminally ill people who might seek help ending their suffering, why was more money spent on promoting assisted suicide than any other issue in Montana?

Could it be that convincing an ill person to end their life early will help health insurance companies save a bundle on what would have been ongoing medical treatment? How much would the government gain if it stopped paying social security, Medicare, or Medicaid on thousands of people a few months early? How much financial relief would pension systems see? Why was the proposed law to legalize assisted suicide [SB 220] written so loosely? Would vulnerable old people be encouraged to end their life unnecessarily early by those seeking financial gain?

When considering the financial aspects of assisted suicide, it is clear that millions, maybe billions of dollars, are intertwined with the issue being marketed as “Compassion and Choices”. Beware.

Public issues are not easy, and they are not always about money. But often times they are. If we want fair and functional government, we need to look deeper than most people are willing to look.. . .

Assisted suicide opens the door to grave abuses of elderly 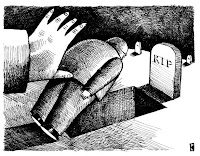 Canadians can watch disturbing videos on a government website warning about elder abuse — an elderly man is pushed to move faster, an adult child steals money from a grandmother’s wallet.

However, just as some still turn a blind eye to the fact that elder abuse is happening, proponents of assisted suicide refuse to connect the dots between legalized assisted suicide and the potential for serious abuse.